Graduate of the Diploma in Metal Clay

By Anna October 22, 2011
I am finally a graduate of the Diploma in Metal Clay from the Mid Cornwall School of Jewellery. I passed grade one in January and decided, after a bit of thought, to do grade two and three together in five days. I decided this because the jewellery school is so far from home and the travelling takes about five hours each way and of course, costs a lot. So I returned to Cornwall in March for both levels. It was very intensive and I think if I was to do it again I would do one and two together and three and four together.
I ended up not completing either level 2 or 3 in March. I had a few earring wires to make for level 2 but a lot to do for level 3. 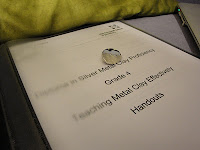 So, I decided to try to do what I could at home before returning this week. Even though I had seven months to make the pieces at a leisurely pace I didn't of course! Although I also didn't leave it to the last weekend either which was good. One of the things that hadn't passed was my box bead (above). I was very disappointed at the time because I'd spent a lot of time on it. However, I did a lot more work on it at home and I like it even more now. One of my friends on the course said that she liked my design (which has different sides) than the original design!
I like it too. I also spent some time with my friend Chu Mei who patiently worked with me on earring wires. They have to match in every way to pass and I had to make five pairs! I really had a lot to do and was very relieved to pass my grades 2 and 3 by the end of the day.
The fourth part of the diploma is a choice between design and construction and teaching. Although both would be useful I decided to go for the teaching part. I am a qualified teacher but I feel that teaching a practical skill is very different from the academic teaching I'm used to.
The assessment started with a written paper on metal clay. We had to get over 85% to pass. Luckily I had been revising and got 93% which I was very happy with.
On the final day we each had to teach for half an hour, have a class sample of the finished piece we were teaching and have a class handout. I volunteered to go first to get it over with and in case any of the other students were intimidatingly good! I was more worried about my soldering than about the teaching (the soldering worked out fine thankfully).
The teaching was fine. I made a couple of very basic errors but passed so that was great. But I'd passed grade 4 before grades 2 and 3!
At lunchtime on the final day I still had a lot to do. I managed to finish it off as a big headache developed. And I passed.
I really do feel that it is an achievement. You have to meet high standards to pass and I have learnt so many new techniques.

Stay up to date!

Popular posts from this blog

By Anna September 26, 2015
I am pretty addicted to pinterest and love that we have so much access to inspiration as jewellers there. I have recently been drawn to unusual stone settings and I find it useful to consider how the jeweller has done it as it gives me a jumping off point for ideas. Here are a few innovative designs that I love.


I love the work of byDaphne Krinos who regularly uses stones in innovative ways. This piece is a round brooch on 18 carat gold

By Anna January 30, 2019
One of the benefits of starting the Make A Ring A Month movement is that I get to choose the theme each month! I had already settled on texture as the theme for January and had a good idea of what I wanted my ring to look like. And weirdly it has ended up as I imagined it would (that doesn't often happen!).
I decided to create a hollow form ring because I am a bit obsessed with making box forms at the moment. If you'd like to learn how to do that I suggest taking a look at this online course with Tracey Spurgin.


I then carved into the silver clay to make the texture. I use the dockyard micro carving tools.

I kiln fired the ring (I always recommend kiln firing rings as they need the strength of a long hot firing). I fired at 880 centigrade for 1.5 hours. Although I'll add here that I'm pretty sure my kiln is underfiring at them moment meaning that it is heating up to lower than the temperature it states. I need to do a proper kiln test for it but with Art Clay Silver …
Post a comment
Read more

I started the ring a month 2019 challenge and it went viral!

By Anna January 04, 2019
There have been lots of jewellery challenges going around for the last couple of years including make a pendant a day, a ring a week, a bird a week etc. I do love these kind of thing but know that committing to making something every day or even every week is just too much for me. So I've been thinking for a while about a monthly challenge, something that would be some work but would still feel do-able.
On new years eve I decided to go for it and set up a Facebook group called Make a Ring a Month 2019. I posted about this group on one jewellery forum on the evening of 31st December and before the new year arrived 30 people signed up! By the next day, we'd hit 100 and we are currently on 189 members from all over the world.
When I first set it up I really didn't know how it would go. I thought that it might be me and about 20 other people that I know. I'm so glad that others have joined in too, it goes to show that it wasn't just me wanting a challenge for 2019.